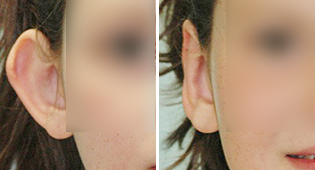 Not happy with the way your ears protrude? Dr Chaplin can pin them back to give a more natural shape to the head.

Otoplasty literally means to reshape the ear and in most cases this procedure is used to correct overly prominent ears. Abnormally protruding ears are present in about 5% of the population with the most common underlying cause being under development of the normal ante helical fold of the ear. The second commonest deformity is that of a deep conchal bowl. Often these anatomic variations can be present simultaneously and both can be corrected at the same time by surgery.

The growth of the external ear is nearly completed at the age of 5 or 6 with 85% of growth being achieved by the age of 3. In fact, at one year of age the ear measures approximately 5cm in vertical height compared with 6cm for the adult! This early maturation of the size of the ear means that otoplasty surgery can be considered once the child is 5 or 6 years old. This is an excellent age for surgery as the child is old enough to understand explanations of surgery and hospitalisation but perhaps too young to yet be the subject of taunts from peers at school.

A significant proportion of patients presenting for consideration of otoplasty are adults. Many of these have endured years of embarrassment and teasing as a child and continue to be unhappy about the appearance of their ears as an adult. Surgical techniques in adults are identical to children and similarly gratifying results are achieved.

Surgery is typically performed as a day case in hospital under a general anaesthetic. A vertical incision is performed in the groove behind the ear with an elipse of skin removed to correct for the excess skin that will be present once the ear is “pinned” back. The technique applied varies according to the problem that requires correction. In the majority of cases surgery will involve placement of permanent sutures to recreate an ante helical fold and to set back the conchal bowl against the side of the head by a combination of cartilage shaving techniques and removal of excess soft tissue in the groove behind the ear.

There are a large variety of procedures described to treat prominent ears. My preference is the “Mustarde” suture technique which in my experience is quicker, gives more predictable results, requires less dissection and results in less postoperative bruising, discomfort and swelling.

Following surgery a pressure bandage is applied to the head, which is left in place for 48 hours. This does help to maintain the position of the ear in the immediate postoperative period but is mainly used to prevent the accumulation of blood (haematoma) in the wound. Following removal of the bandage by the surgeon, patients will note an immediate improvement in the position of their ears. Some swelling is always evident but is largely resolved within 7-10 days. I advise otoplasty patients to wear an athletic headband for a further 4-6 weeks following surgery to avoid displacement of the ear when moving around in their sleep.

Bleeding and haematoma formation is uncommon. Infection is also rare with the procedure being covered by antibiotics. An early sign of bleeding or haematoma formation may be excessive pain noted by the patient while their head bandage is in place. Occasionally the sutures used to reposition the ear may pull out, although usually the position of the ear is maintained by the remaining sutures. Trauma to the ear in the form of pulling is the usual culprit although occasionally this will happen spontaneously.

Generally patients are very pleased with the result of surgery but occasionally some prominence will remain on one side or the other requiring revision surgery. Patients or parents should note that most people’s ears are slightly asymmetric and absolute symmetry is both unnatural and difficult to achieve with otoplasty.